History of the Ukulele

The lulling strums of a ukulele may transport you to the tropical beaches of Hawaii, but the ukulele’s origin began much farther away from an island paradise. The ukulele’s journey introduced soothing sounds to America that grew into the booming market of ukuleles that is seen today. Its popularity has since expanded to many genres of music and a wider market of uke enthusiasts.

Beginning History of the Ukulele

Though unique in sound, the ukulele was not a completely original instrument. It was an adapted form of the popular Portuguese instrument called a machete. When Portuguese workers traveled to Hawaii in 1879, they brought along their stringed instruments and instantly awed the natives with its sweet sound. The Hawaiians established the machete as their national instrument and renamed it ukulele, which translates to “jumping flea.” Also aboard the Portuguese ship were three cabinetmakers that opened their own instrument shops in Hawaii, further promoting the popularity of this new instrument. 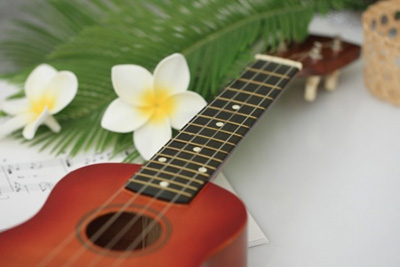 The history of the ukulele spread to the rest of America when it began being sold as an image of Hawaii. Buyers were enticed by the island getaway and the 1920’s became a booming market for ukuleles. Ukulele’s were advertised as “easy to learn and easy to play.” During this time, performers such as Ernest Kaai and Cliff “Ukulele Ike” Edwards spread the ukulele’s fame across America and the world.

Although the stock market crash did affect the ukulele market, World War II became a time of growing popularity for the stringed sensation. They were common souvenirs for US troops and its upbeat strums of joy served as sounds of celebration. Plastic goods were taking over the markets, so cheaply made ukuleles called novelty ukes were decorated with Hawaiian designs, sports logos, and cartoon characters to appeal to a wide range of consumers. Ukuleles even became part of elementary school curriculum, but this new wave of fame soon fell.

In the 1970’s the history of the ukulele took a down turn when guitars became the instrument of choice. Performances by the eccentric and unique Tiny Tim proved to make a lasting impression, but did not continue on the legacy of the ukulele. However, making a comeback in the 1980’s and 90’s, the ukulele regained its quaint and simple image as enthusiasts around the world embraced the way for a simpler life. Composer Eddie Kamae founded the Sons of Hawaii in 1960, inspiring the youth and fueling the appreciation of traditional Hawaii. Remembering where the history of the ukulele began has allowed the sweet instrument to live on today and continue to entertain musicians and fanatics alike.

Learn How to Play the Ukulele